As long as commerce has existed, traders have banded together. The first purpose of their association was to seek common protection against enemies. Later, they established codes to govern trade, and still later, they attempted to influence legislation. The early associations of traders have commonalities with the modern Chamber of Commerce – a relatively new product.

The first known use of the term "Chamber of Commerce" occurred in Marseilles, France, where such an organization was established by the City Council late in the 17th Century. European Chambers of Commerce differ considerably from the American organizations. Although they were associations of businesses, they operated frequently as quasi-public agencies, vested with administrative and judicial powers with respect to trade. 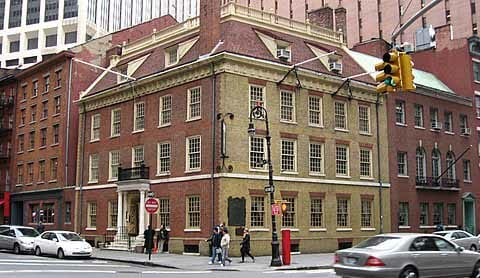 The oldest Chamber of Commerce on the American continent was a statewide Chamber in New York, organized in 1768 by a group of twenty New York merchants who met at Bolton and Sigel's Tavern, in the building leased from Samuel Fraunces, now known as Fraunces Tavern. That Chamber would be chartered by King George III two years later in 1770. The second oldest is the Charleston, SC Chamber, formed in 1773. By 1790, the number of local Chambers had increased to 40. Early American Chambers, like their European prototypes, were organized for the protection and promotion of commerce. The establishment of the New York State Chamber, for example, was a direct result of the obnoxious Stamp Tax Act.

In their role as associations of businessmen, the early Chambers of Commerce undertook to promote the sale of goods. They organized markets, enforced rules of trade, and protected goods in transit. But their activities were limited to those directly concerned with commerce. The emergence of the Chamber of Commerce as a true community organization came later when businessmen realized that their own prosperity depended upon the development of a prosperous, healthy, and happy community. A good business climate must be maintained.

Prior to World War I, most local Chambers were primarily interested in attracting new industries to their community, what we would now call ‘economic development’.  Civic and commercial development took second place. Gradually, Chambers came to recognize that industrial growth was dependent upon civic and commercial development. In fact, so much emphasis was placed on civic problems that many Chambers began to assume the character of civic associations. Their membership was all-inclusive, and their program was largely one of promoting public facilities. By 1925, it was perceived that Chambers, in order to be true to their purpose, must remain primarily business organizations and express the point of view of business.

Another major change took place with the advent of the New Deal in 1933. Governmental affairs at all levels became the major items in Chamber of Commerce programs of work. Chambers of Commerce became the interpreter of government to business, and conversely, of business to government. In this field of activity, the Chamber of Commerce is assuming growing responsibilities and achieving increasing usefulness.

As of 2016, the US Internal Revenue Service (IRS) recognized 1,561,616 Not-for-Profit organizations, an increase of 4.5% from 2006. The super majority of them classified as charities via the IRS’s 501(c)3 tax status. That means, however, that 90,908 of those organizations are 501(c)6 organizations, known more commonly as trade associations, which would include chambers of commerce and professional associations. Membership based associations employ over 1.6 million Americans. California employs the largest number of Chamber employees, with New York, Florida, Illinois, and Pennsylvania following.

Each Chamber of Commerce is a stand-alone entity with no specific ties to any other Chamber. Chambers may be members in each other’s Chamber or in other Chambers. They may also form coalitions to further business goals or be fierce competitors.